Tracing the Trajectory of the Mauritius Oil Spill: What We Know So Far

Nearly a month and a half after the issue of Mauritius Oil Spill received media coverage and public attention, not much has been achieved in the race to save the turquoise waters and rich biodiversity of the island nation. As I write about the timeline of the key events in the Mauritius Oil Spill case, a fifteen kilometers stretch of the coastline has already been stained with oil. While hundreds and thousands of volunteers continued to work relentlessly to save marine treasures and aquatic lives, the Mauritian government kept on wondering how to salvage the situation, after initially downplaying the problem. And by the time authorities stepped up to stop the leak, itSimeon Panda – L’ambizione su tutto (motivazione del bodybuilding) qualita pct con spedizioni bodybuilding femminile e motivazione fitness – naja coricwas already too late: 1000 tons of oil was spilled into the seas and oceans.

Here is the story so far:

The MV Wakashio, a Panama-flagged bulk carrier, owned by Nagashiki Shipping Company and operated by Mitsui OSK Line, went off course and grounded on a coral reef off near Pointe d’Esny, more than a mile off the southeast coast of the island nation of Mauritius. The ship was carrying nearly 4,000 tons of fuel oil and 200 tons of diesel on board.

Twelve days after the MK Wakashio struck a coral reef off Mauritius, the government and authorities said in a statement that the hull of the Wakashio was found to be cracked and a leak had appeared. Earlier, the Mauritian government had declined the occurrence of any oil spill at the affected region.

It is estimated that about 1,000 tons of fuel oil has already leaked into the pristine, crystal clear waters of Mahebourg Lagoon, one of Mauritius’ most pristine coastal areas.

According to Kavy Ramano, the environment minister of Mauritius, a salvage team that had been working on the ship was evacuated, some 400 sea booms have been deployed in an effort to contain the spill, and a police investigation has been launched into issues such as possible negligence.

“Our country doesn’t have the skills and expertise to refloat stranded ships, so I have appealed for help from France and president Emmanuel Macron. Bad weather has made it impossible to act, and I worry what could happen Sunday when the weather deteriorates.”

Ship’s operator Mitsui OSK Lines released a statement confirming that the vessel has broken into two parts, caused by a crack in a cargo hold on its stern side. It further said that nearly all the remaining 3,000 tonnes of oil had been pumped off the ship by that time, though there were still 90 tonnes on board, much of it residue from the leakage. 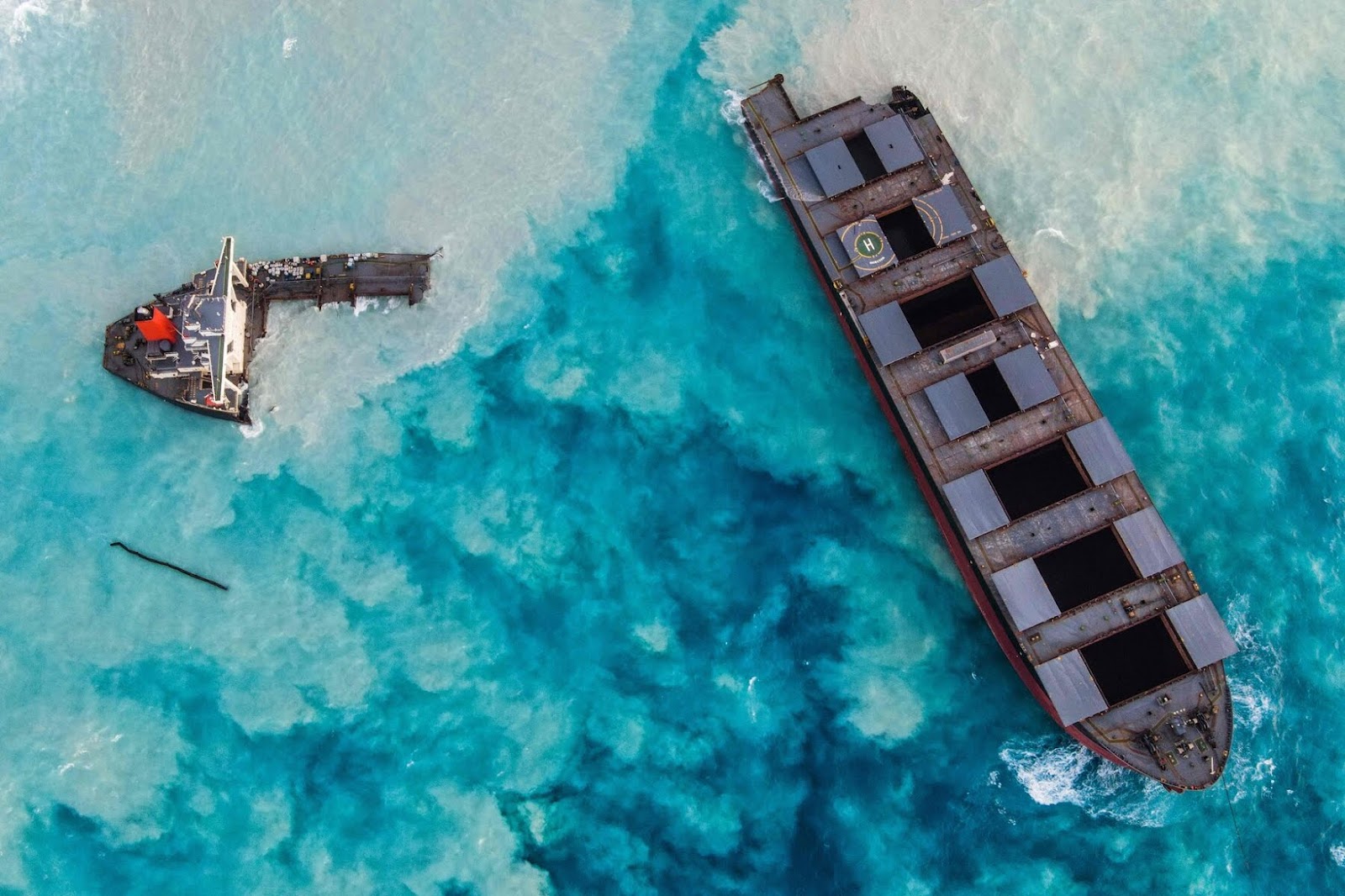 An aerial view on the MV Wakashio bulk carrier on Monday. The ship spilled about 1,000 tons of oil into the sea after grounding on a coral reef in July.

The captain of the MK Wakashio, Sunil Kumar Nandeshwar, was arrested alongside the chief officer of the ship, Tilak Ratna Suboda, a Sri Lankan. Mr. Nandeshwar, an Indian national, was arraigned in a district court in the country’s capital, Port Louis, on the charge of endangering the safe navigation of a vessel, an offense under Mauritian maritime laws.

Sunil Kumar Nandeshwar is charged with endangering safe navigation and based on the seriousness of the charges has been held in jail without bail. If found guilty, media reports say he is facing up to 60 years in prison. He has already appeared before the district court on August 25 and September 1.

The Maritime Union of India is seeking support for a fair trial as well as to improve the conditions of the captain’s detainment in Mauritius.

“MUI’s communication has requested these bodies to investigate the arrest of Captain Sunil Nandeshwar in Mauritius and conduct his judicial trial in the local court abiding the guidelines laid by the International Maritime Organization and without bowing to any political, governmental or corporate pressure.”

Maritime Union of India in its statement.

Tens and thousands of people took to the streets to protest against the government’s handling of the oil spill in the Mauritian capital of Port Louis. The protest was the biggest demonstration Mauritius has seen in 40 years, with up to 75,000 marching in the capital against Prime Minister Pravind Jugnauth. The protestors called for the leader and top officials to step down. They also demanded an investigation into the death of at least forty dolphins which could have been caused by the huge oil spill.

Thousands of people have marched through the Mauritian capital, Port Louis, protesting against the government’s response to a massive oil spill off the island’s coast.

As reported in The Guardian, the Mauritius government has said it will carry postmortems on the dead dolphins and also formed two investigation teams to look into the incident. Veterinarians have so far examined two dolphins and said there were no signs of oil in their bodies, a preliminary report stated.

Similar protests were held outside the Mauritius High Commission in London, in Paris and Perth. Another protest is scheduled for the 12th of August.

Mitsui OSK Lines announced that it will provide 1 billion Japanese Yen (US$ 9.4 million) over several years to fund environmental projects and support the local fishing community, protect mangroves and coral reefs, and research in partnership with experts and local NGOs along with setting up an environmental recovery fund.

Since you are here, please make sure that you contribute towards our mission to #SaveMauritiusReef by signing out the petition here.

Coral Reefs: Their crucial importance in ecosystems and their vulnerability to oil spills

NooraUncategorizedSeptember 19, 20202
The consequences of the MV Wakashio Oil Spill are still very visible, despite the fact that it occurred more than a month ago: aside from rising diplomatic and social tensions, endangered species are still at risk, and many forms of …
END_OF_DOCUMENT_TOKEN_TO_BE_REPLACED

Debunking the Stigma around Mental Health

JoshuaUncategorizedAugust 19, 20202
With the current COVID-19 crisis, health and hygiene are at the heart of governments’, institutions’ and individuals’ concerns. The UN’s WHO’s role and sometimes its failures are under a permanent spotlight, and so is the importance of health that is …
END_OF_DOCUMENT_TOKEN_TO_BE_REPLACED

UNIVERSAL BASIC INCOME: THE ROAD OUT OF UNCERTAINTY?

JoshuaUncategorizedSeptember 9, 20202
The coronavirus pandemic brought upon us so many things. For me and many others, it became a time for reflection, strategic thinking, and deep study on things of personal and professional importance; one that saw me explore, in theory, the …
END_OF_DOCUMENT_TOKEN_TO_BE_REPLACED

#SaveMauritiusReefs: A Call for Action

JoshuaUncategorizedSeptember 21, 20202
As fear fills hospital alleys, horror rains in Beirut, poverty kisses our streets, and uncertainty takes form, it is worthy to also note that the heart of nature is bleeding. What is happening? On the 25th of July, the Japanese-owned …
END_OF_DOCUMENT_TOKEN_TO_BE_REPLACED

We are a group of Gen Z Individuals across 6 continents inspiring Gen Z contributions on creating effective solutions that help address the Global Goals by creating awareness amongst Gen Z on issues we consider a threat our future.