Why protect our Oceans?

This is one of today’s most frequently asked questions and most prominent issues, as climate change, pollution and reduced biodiversity are threatening our unsustainable lifestyles. But many of us, myself included before I underwent this research, don’t realize just how crucial oceans are to maintaining our planet’s and our societies’ equilibrium. As LearnBlue’s theme of the month is closely linked to the 14th SDG, Life Below Water, I want to share what I know through this article, that will be followed by a second part focusing on ways that you can take action.

The Many Roles Of the Ocean 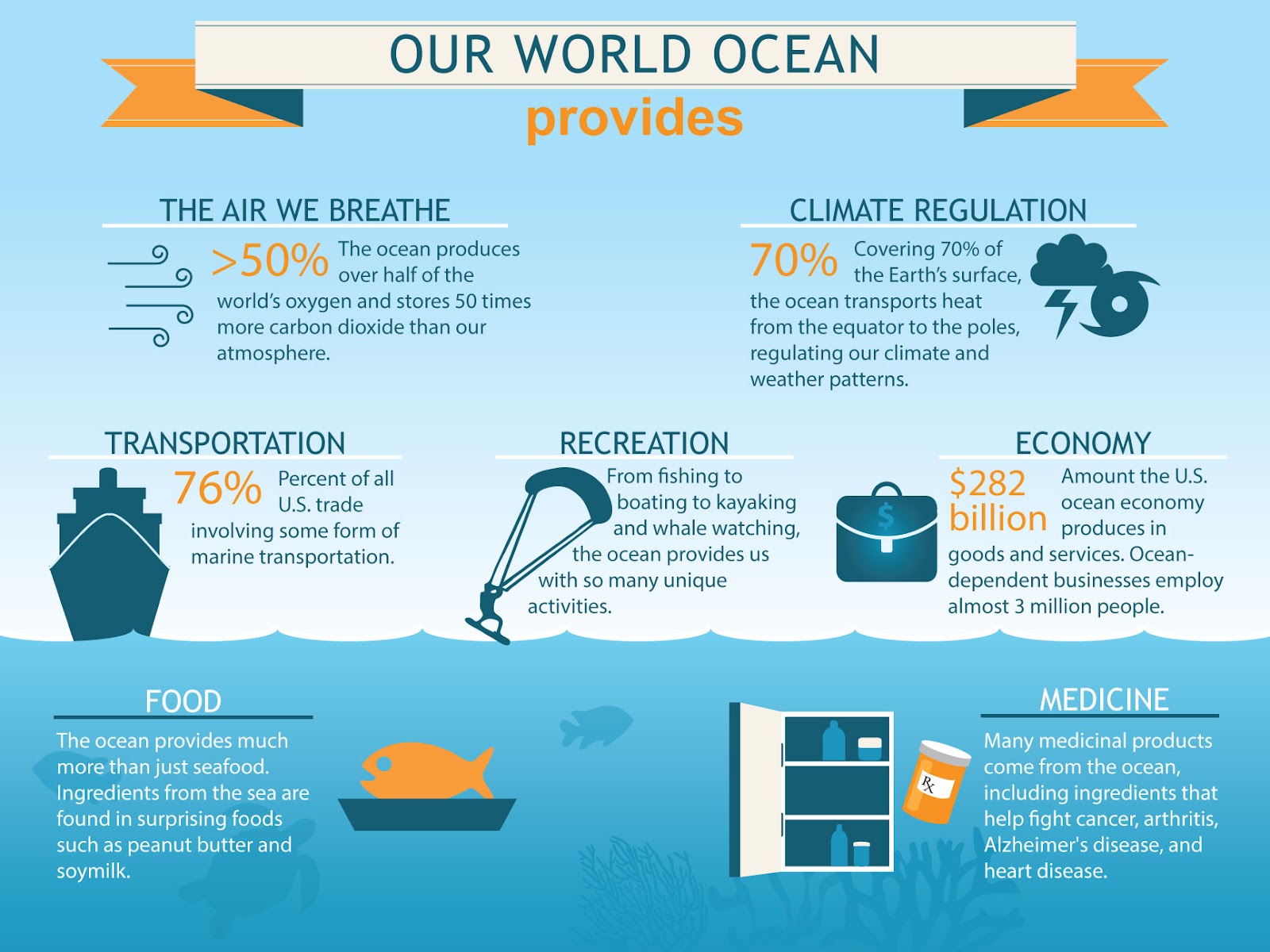 Some of the many roles of the ocean

Regulating our Climate, Weather and Atmosphere

First, Oceans absorb the majority of the sun’s radiations, mainly around the equator, and retain its heat, keeping our lower atmosphere warm. But the ocean doesn’t just store solar radiations, it also contributes to the even distribution of heat on the planet: ocean water is constantly evaporating, and by doing so, it is carried away to various places, increasing the humidity and temperature of the surrounding air, often forming rain and storms. 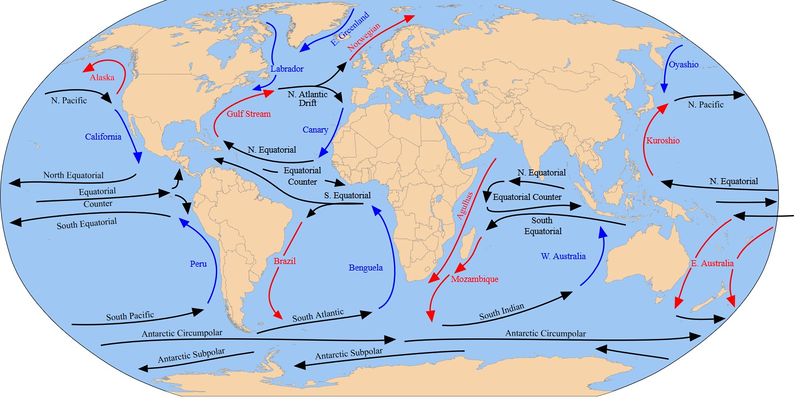 An overview of currents

The Ocean is also largely responsible for weather patterns, driven by its currents. They transport warm water and precipitations from the equator towards the poles, and cold water from the poles to the tropics, regulating global climate. Without the influence of currents, temperatures would be more extreme and would render many places inhabitable.

It is often thought that forests are the first source of oxygen, but in truth, oceans are responsible for 70% of the Earth’s oxygen. This gas is produced by phytoplankton, a microscopic plant that is carried by ocean currents, absorbing carbon dioxide and releasing oxygen. Moreover, the ocean also absorbs CO2, balancing the carbon cycle and the Earth’s temperature. These figures already show that these waters are essential to maintaining our planet’s atmospheric balance, but the role of the ocean doesn’t stop here.

A source of food and therapeutic products

The Ocean is also an extremely important source of food: fish represents 16% of all animal protein consumed globally. Moreover, crustacea, algae and other sea plants are also commonly used in cooking. Seaweed is a source of important nutrients and according to the FAO, could have major medicinal properties.

The answer to the constant pressure on resources due to farming could be in the oceans: just a gram of protein from cattle requires 112 litres of water. Under the condition that we make our approach to fishing and using the ocean’s resources in a more sustainable way, marine fauna and flora could be the answer to the needs of a growing human population.

Curing diseases can also come from the ocean: for instance, antiviral drugs Zovirax and Acyclovir come from Caribbean sponges.

Besides from the forms of life it hosts, the ocean’s water itself is thought to have therapeutic properties. When we dip into water, our heart rate slows down, and our blood flows towards our brain, heart and vital organs through the diving reflex. According to some research, the ocean also has the ability to reduce psychological stress and improve our moods.

We only know a little about the ocean and its properties in the end, and it could hold the answer to many of our modern problems. As its species count continues to fall, often before we even get to discover them, it is crucial that we review our exploitation of the ocean.

Economic benefits of the ocean: a source of millions of jobs 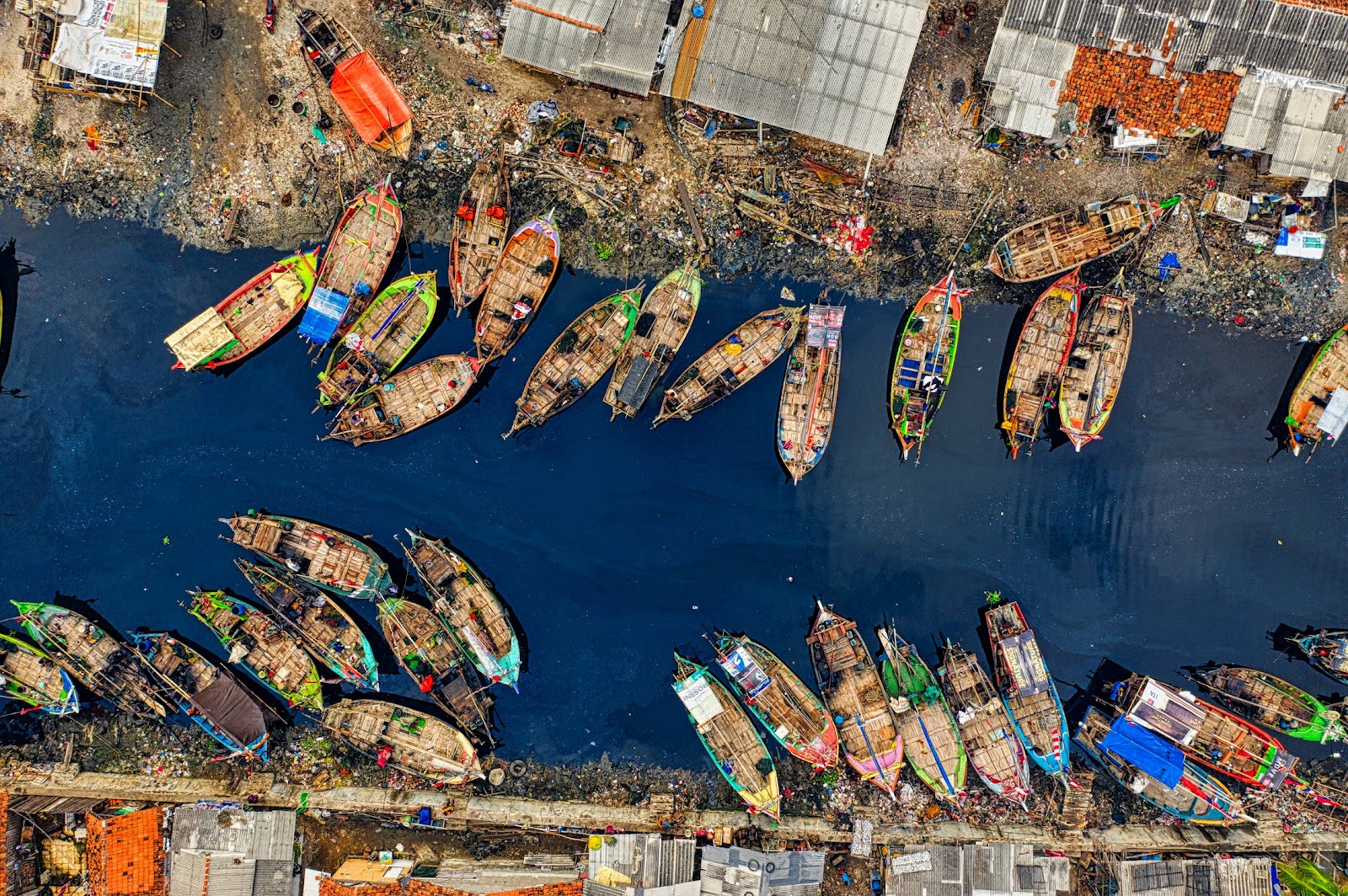 As many as an estimated 200 million jobs are connected to the global fishing industry, as fish are the single most-traded food commodity worldwide. Also, more than 3 billion people rely on the sea for their livelihoods.

According to the OECD, by 2030, ocean-based industries will employ more than 40 million people worldwide, mainly in fisheries or tourism. 90% of trade also transits by the sea.

If marine resources are at risk, the economy and lives of billions of people are also endangered. All these jobs need to be modernized, so that they become more respectful of the marine environment, and so humans can continue to rely on sea waters to survive.

The Home of millions of species

The number of species in the vastness of the ocean still remains unknown to this day. According to the US National Library of Medicine’s National Institutes of Health, “91% of species in the ocean still await description.” It is fascinating to think that we still have so many species to discover, name and describe, perhaps functioning in ways we have not yet even imagined, yet it is frightening to realize that we are on the verge of losing life on earth that we haven’t even come across yet.

All the creatures that live in the Ocean play an essential role in the trophic chains of ecosystems. Due to climate change and other phenomena, many of these ecosystems have been deeply distrubed and many species have been unable to adapt: Global warming has already been linked to mass mortalities in the Mediterranean.

Oceans are therefore essential to not only our survival as a society, but to the survival of the human species and billions of other plants, animals and fungi. It is safe to say that all that is living on the Earth depends closely on the ocean, which is why it is essential that we take action.

Currently, the Ocean is definitely being overexploited: 90% of wild fish stocks are currently harvested at or over their sustainable capacity according to the FAO, and it is said that during the last 40 years, the marine population has decreased by half.

Moreover, the ocean also suffers from man-made pollution: each year, by weight, about three times more trash is dumped into the ocean than fish caught. This trash sadly includes everything from plastic bags or crude oil to sewage, nuclear waste or military munitions. Carbon dioxide pollution causes ocean acidification, which is a great threat to Earth’s environment: as oceans absorb more and more CO2, its water’s pH levels decrease, endangering sensitive-to-change organisms like coral reefs, and ultimately shaking entire interdependent ecosystems. Plastic debris is as well often confused by fish for food and zones like the “Great Pacific Garbage Patch” are extremely dangerous.

For those that are not yet convinced, ocean pollution directly affects us: the fish we eat often have the highest concentration of toxic tissues in their bodies, which can cause illness in humans. We must not forget climatic disruptions, the increased likelihood of natural catastrophes, or disastrous oil spills…

It goes without saying that immediate action to tackle these issues is necessary. It is very unlikely that we are ever able to restore our oceans completely to what they were before, but we definitely need to do everything we can to stop to halt the consequences of our unsustainable behaviors.